So the plane trip was not bad until we were about 15 minutes out and then the pilot said that there was severe wind turbulence at 8000 feet so we rocked and rolled for the next 10 minutes before we finally touched down. Then we sat on the runway for almost an hour because they did not have a gate for us. The fun did not end there. The pilot must have just parked the plane, turned off the lights and went home because no one bothered to get our luggage off the plane. It took someone calling Jet Blue to have them send someone to get our luggage. Half of it came out and then it just stopped again. I was on hold to Jet blue when it eventually started again. It took them about 90 min to get our luggage and then we were in for a treat. The temperature 12 deg F with a wind chill of -2deg. That will wake you up. The ride into Manhattan was great, We had a good uber driver. We got into the hotel with two very hungry guys. Where to go and get a bite ? Luckily, Max remembered that there is this Ukranian place called Veselka’ s in the East Village. We went there for dinner in October. So we ubered over and the guys had hearty Rueben Sandwiches and I had borscht with mushroom dumplings…OMG…I love borscht for some odd reason. It was perfect for a very cold night. On an interesting note…..after our last visit, I watched Oceans 7 on the plane and Sandra Bullock is sitting planning in Veselka’s. 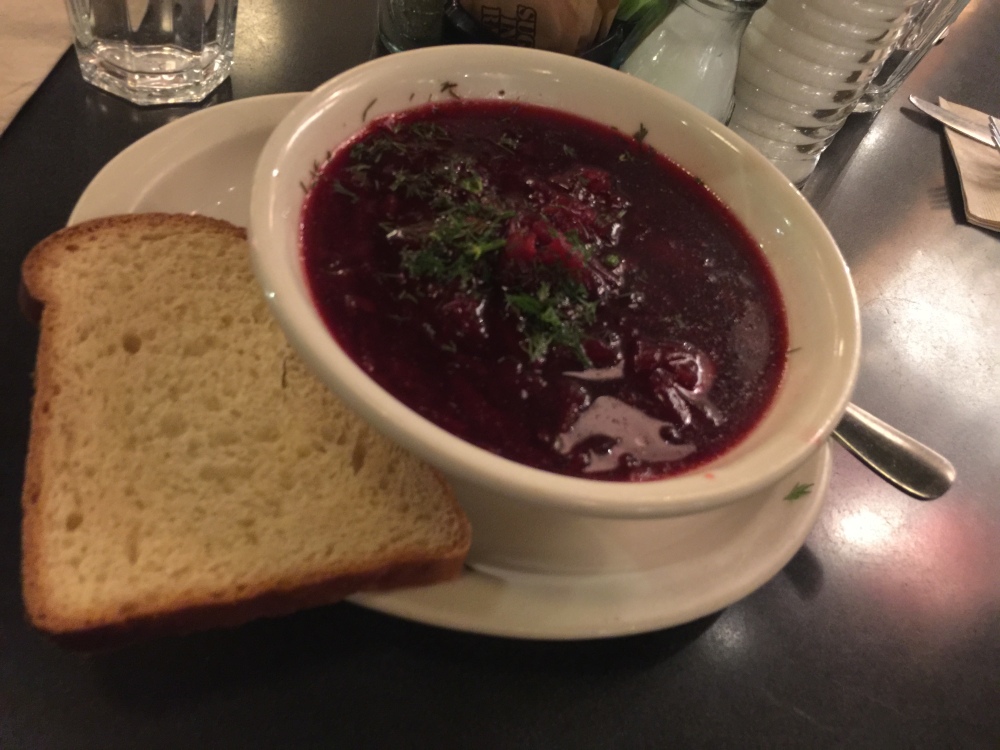 We came back to a very cold room. My side of the bed next to the window was ice cold. The floor was freezing. We jacked up the temp to 80 and by the morning it was still 67. I slept in a sweater and socks. What a sight! I looked like Ms Hannigan in Annie. This evening I called them again and they sent someone to fix it but the heater was broken so they moved us to a better room. This one at least has a real bathroom with privacy. The other one was peculiar because the shower and sink were basically in the room.

We went to brunch and then after brunch as we headed to the stores Max had a panic attack. That does not happen to him often but I think that he became overwhelmed because he suddenly could not breathe and needed to sit down. Poor kid. My heart broke for him. He always keeps himself so buttoned down.
Today we hit Bed, Bath and Beyond and Walgreens and managed to do most of the shopping for all of the items we need for his move in tomorrow morning. Did you know that it is easier to find a yeti in NY than a set of extra long single bed sheets? It is a pity there are no colleges or Universities that use that size bedding in the whole of Manhattan. The guys finally found a set at Target in Herald Square.

So now I am going to say good night and tomorrow I will post pictures of the move in. Not sure how to handle all of these emotions. I will see how the rest of the week develops. We are both heartsore about having to let the chicken fly. I want to puke when I think I need to get on a plane on Saturday and leave him behind. Barf.